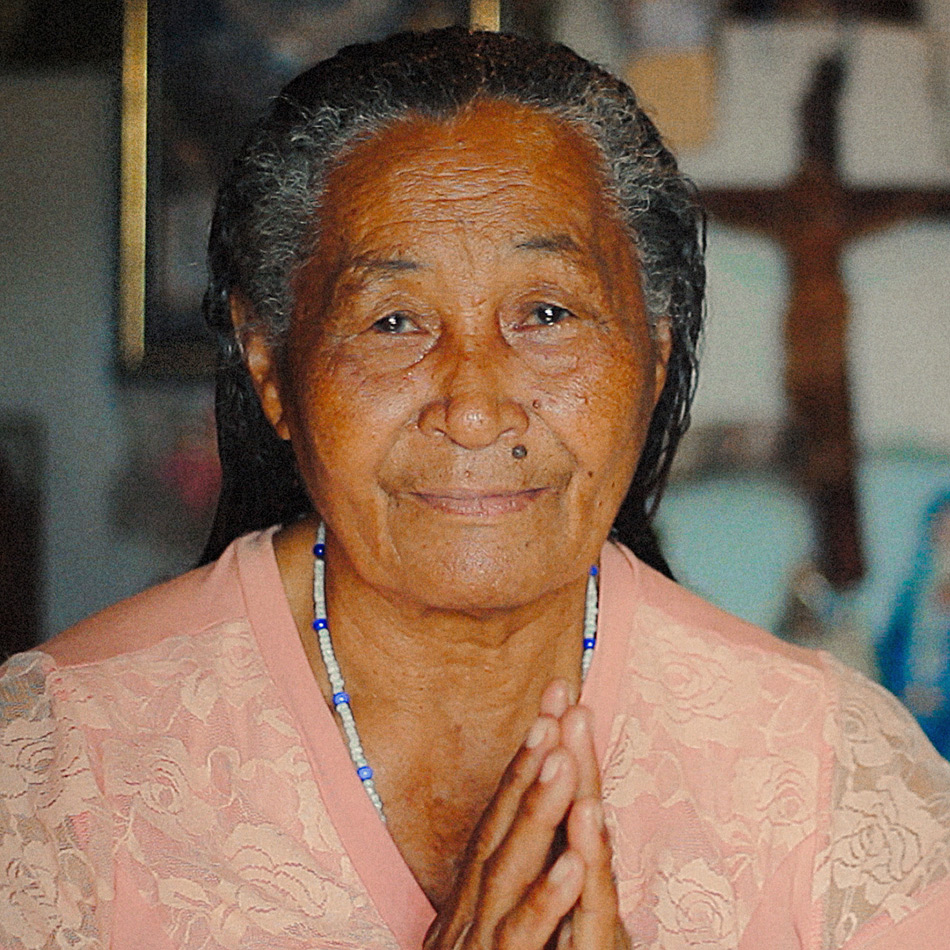 “Midwives are spirits of light who work to help people.”

“Midwives are spirits of light who work to help people.”

Dona Zefa Semore tells the story of her life starting with her own birth. She was born en-caul (inside the amniotic sac), a rare occurrence. Because of this, she tells us that she has had her gifts and experience from birth. (Many midwives believe that children born in the amniotic sac have spiritual gifts.) Dona Zefa has displayed her gifts since childhood, beginning to pray for healing at age seven and delivering her first child at age eleven. Since then, she has never ceased praying for healing and “catching children”.

Nowadays, around one hundred people from all over northeastern Brazil have come to the quilombo Serra da Guia to seek out Dona Zefa in search of spiritual aid, cures for illnesses and life advice. Zefa’s popularity springs from her work as the region’s faith healer and midwife, to which she has dedicated herself for nearly sixty years. On entering the quilombo, we began to comprehend her story better as we spoke with people on the streets — in every one of their lives Dona Zefa had passed through and left her mark. We’d hear something different from each person: “Dona Zefa delivered my children”, “Zefa baptized my son”, or “Dona Zefa is like a mother to me.”

Next to her house, I entered a little room that she uses for spiritual consultations. On her altar there are images of African orixás and saints, and I could feel the power of that place and the prayers it receives every day. As she started to pray, Dona Zefa closed her eyes and began to sing a song to incorporate the spirit of a caboclo. She listened to each question people asked and, with her eyes remaining closed, sung songs, cleaned the energy with hand movements and, at the end, gave out prescriptions made from medicinal plants in the form of baths, syrups, teas, oils and drinks. She also gave serious advice about habits and behaviors during the treatment.

Attached to the little prayer room was another room where she treats pregnant women. She explained to me that in recent years she has chosen to reduce the number of births she attends and only “catches children” when she sees that there won’t be enough time to get to the hospital, since it has become increasingly difficult to register the children born in the quilombo community.

She has one great worry: since she is illiterate, the only way she can pass on her knowledge is orally, but the young women in the quilombo are not interested in maintaining this profession. With her natural poetry, she said that she didn’t know “what the branches and fruit of her roots would give”, and was saddened by it. Her knowledge is her great legacy, and transmitting it would be a way of remaining alive. This is why she asked us to keep what we experienced and learned in that moment in our hearts.

Dona Zefa is an important political and community leader, especially when it comes to black pride, women’s empowerment and traditional knowledge. In a blog dedicated to her, there are pictures of her meeting with Zen Buddhist monk Monja Coen, and receiving praise from such people as ex-president Lula and Dilma Roussef. She was one of the people responsible for obtaining electricity for the community via solar panels. There are still a number of things to fight for, since basic sanitation is precarious and there is no indoor plumbing. These are part of Dona Zefa’s political platform, and she doesn’t want to die before guaranteeing that these basic rights are met. During periods of intense draught, the army comes to the community with tanker trucks to fill up the well with water.

Mealtimes were a real event at her house. Food was never lacking, and neither were people to feed. Children, relatives, friends, adopted children: everyone arrived after smelling the aroma of rice and beans. Dona Zefa ate and prayed at the same time. “Thank God, we have never wanted for food here! Anyone who wants to can come.” In the quilombo, there are approximately eighty families who sustain themselves through family farming, and beans and corn are the protagonists on most people’s tables. She wakes up with the sun every day and firmly tells us, “One who sleeps a lot learns little, my daughter.”

Dona Zefa called in one of the quilombo’s pregnant women in order to show us how she conducts a checkup with them. Before the woman arrived, she went to her consulting room, lay a flowered sheet on the exam table, put on a white shirt and checked that everything was clean and organized. When the pregnant woman arrived, they hugged and she lay down on the table. Zefa assiduously showed me how she touched the belly, how she felt where the baby was, where its back and head were, and explained the position of the uterus to me, placing my hand in hers and teaching me how to feel the belly. At times, with all of her naturalness, she’d close her eyes and say a few words in prayer, asking for the woman to continue to have a healthy pregnancy and an easy delivery.

During the consultation, Dona Zefa and the woman chatted. Zefa asked about her life and her husband. Her labor would happen in a hospital because of the bureaucracy of registering babies, and she lamented about the difference between the treatment she’d received at Dona Zefa’s and at the hospital: “Here, I get VIP treatment.” Later, this same woman confided to me that she was very worried about what would happen to the quilombo once Dona Zefa is gone. That same day, I heard Dona Zefa say, “If I could, I would not die. I want to stay a lot longer to build, help and do what I can to please.”